Finally after sitting on my table all week I found time to play with my new Shimpo Aspire tabletop wheel. Throwing is something I have wanted to do since I was at school. I longed to ask the teacher if I could have a go at throwing, coiling always seemed so boring by comparison. Also I used to visit Holkham Potteries every year when I was on holiday, I was mesmerised watching the potter sitting up there on his ‘pedestal’  looking so grand in the eyes of a child, and performing magic with a lump of clay.

I’ve never touched a wheel before so I was really apprehensive about  having a go, and as the week wore on I began to feel doubtful, could I ever learn to throw a pot?

So yesterday I had my first go, and this is the result of my very first attempt. 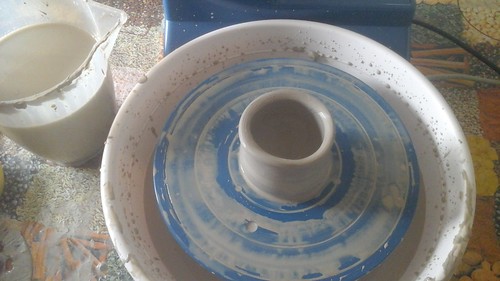 I found getting the pot off the batt very tricky, I managed to distort the pot so I left it til it dried and formed it into a little lipped vessel. I think it’s probably far too thick but I just want to keep it as my first wheel thrown pot. 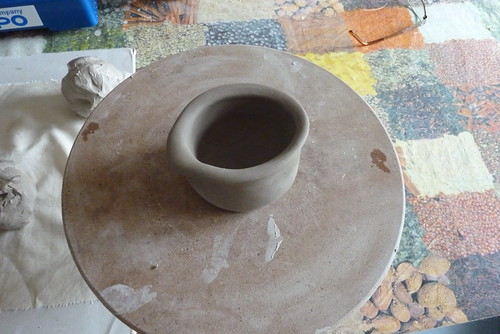 I had a lot of failures but a few bowls don’t look so bad if you don’t look too close. 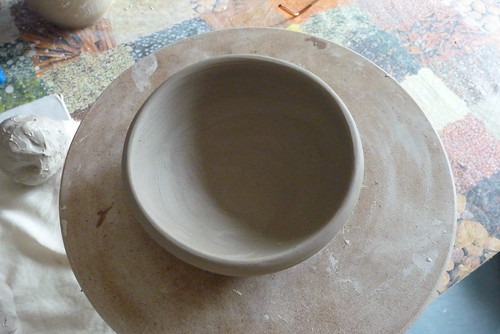 OH would like a porridge bowl for his birthday, so no pressure. 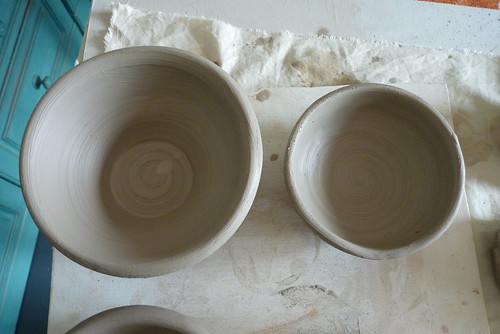 I know I need a lot of practice, but that’s the fun and challenging part for me, it’s good to  learn new things as we get older, and one day I may be able to throw a half decent pot, until then I shall enjoy the journey, and I love ‘wonky’ anyway as it has so much more character.