We went to Luing for 3 weeks in the hope of seeing otters in the wild. We have tried looking for these elusive creatures many times on day trips but we’ve never been successful. My husband joked that we would probably see them on our first day on Luing, and he was right.

Walking along the shore something in the water caught my eye, just a glimpse. I thought it might be a seal. OH got his binoculars out and said, “it’s not a seal, it’s an otter, there are two of them swimming together”.

There were actually three otters when they climbed out onto the rocks. We sat and watched them for a good half hour, fishing, eating and playing, we could hear their little squeaking noises. 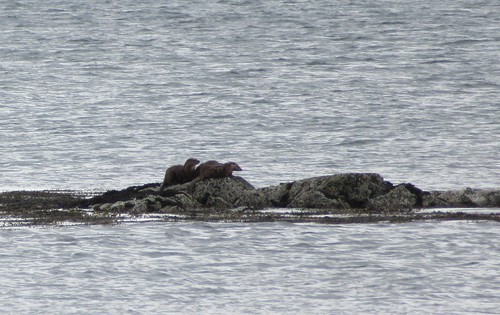 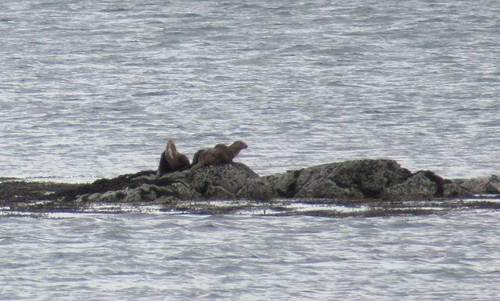 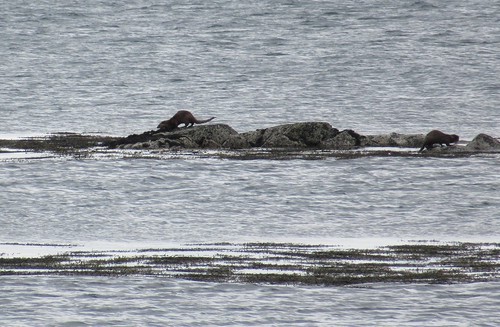 Then they swam further along the shore, we watched them until they were just tiny distant specks.

We walked this path daily for 3 weeks at different times of day in the hope of further sightings. We had 7 sightings in total. The second time we found some large rocks to lean against, being slate the sun had warmed them up so we laid back and watched the water. We must have blended in quite well because an otter came on shore quite close to us. It came within 15 to 20 feet of us, it saw us but didn’t seem too bothered. We watched it going back into the water to catch a fish, eel or crab, sometimes it would come ashore to eat it’s catch, then it swam along to what we now called ‘Otter Rocks’. 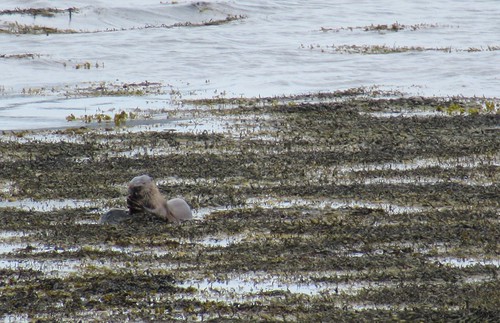 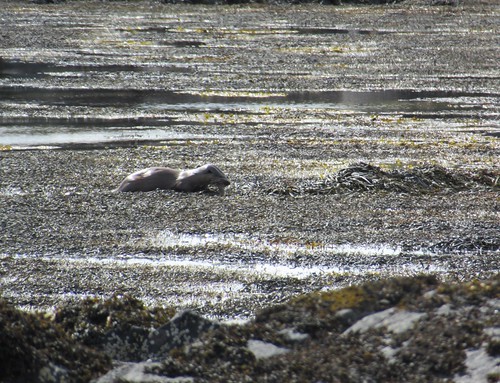 We started to know what to look for when looking for otters, something that looked like a floating log, moving along making a gentle wake. Or just a glimpse of a tail or head. Two or three otters swimming together with arching bodies could easily be mistaken for the Loch Ness monster. We watched three swimming together  in a line or spiralling around each other as they swam.

There was a book in the cottage called ‘On The Swirl Of The Tide’ by Bridget MacCaskill, it’s a beautiful read about a year studying otters, I’ve found a copy on the internet. 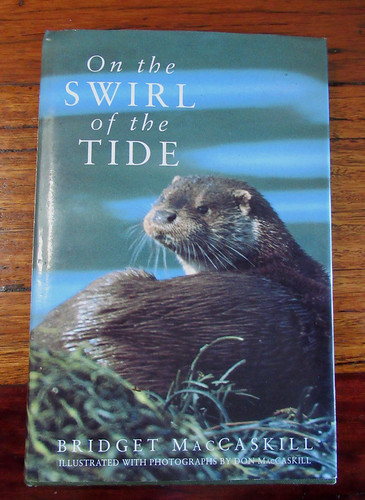 Here’s a lovely quote from the book, which I can relate to now….

“In the bubbling, splashing seething cauldron of foaming water it was quite impossible to sort out who was who while they were madly corkscrewing round each other’s smooth bodies, swooping into the seaweed forest below, curving and swerving through it’s restless stems, rising to box and bite, then breaking away to start the game all over again. Excited wickering echoed around the giant rock sides of the Narrows and told the rest of their world that the otters were having a party”

We had another otter sighting, playing on the rocks and eating a huge fish. We watched the male otter bringing fish to the smaller female, who was lazing around on the rocks. They are very playful creatures, rolling on their backs in the seaweed and sunning their bellies.

Our next sighting was to be the last one along this shore, we were on our way home one evening when I caught a glimpse of a head in the seaweed. There was a pair of them, they swam to the rocks and entertained us for almost two hours. It was a joy to watch them playing, fishing and eating. They love to roll on their backs like dogs. Then we lost them on the other side of the rocks.

We noticed a caravan had been brought down to the shore but there didn’t seem to be anyone in it, it stayed unused for a few days. Then one day there were men in waders, placing something on otter rocks  for shellfish farming apparently. I felt sad as I knew the otters wouldn’t come back. I went every day still to look for them, even walked much further around the bay where I often watched them heading. There were more rocks on the other side of the bay but they were difficult to get to, which is where they are probably playing and fishing now.

When the tide was out one day I went over to some of the rocks to look for evidence, there was spraint, (old and new, but not fresh), and lots of crab shells and legs, chewed molluscs and bivalves that had clearly been cracked open by very sharp otter teeth. 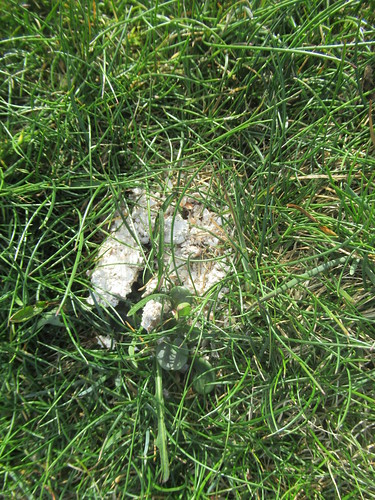 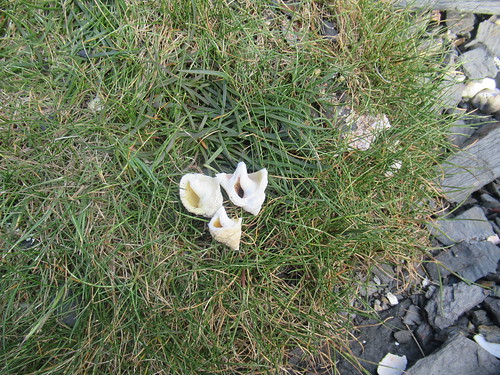 Not surprising when you see their teeth. 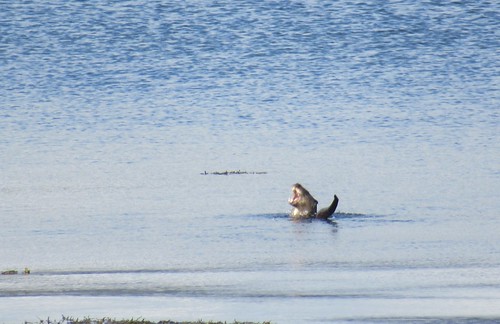 I’ve put my video clips all together for a little otter fest, I hope you enjoy.

I had given up hope of seeing otters again, but when we were waiting for the first ferry of the day to go home I caught a brief glimpse of another otter on the shore at Cuan Sound. It seemed to me they were saying goodbye, or was it me saying goodbye to the otters?

I feel so privileged.

3 thoughts on “Otters on Luing”