So when I say it took me a day to make the jacket the sewing part actually took an afternoon, my morning was taken up putting the pattern pieces together. There wouldn’t have been any problems but for some reason half my pages were a slightly different size. But which pages were the wrong size? After printing some test pages I eventually worked it out and reprinted those pages. 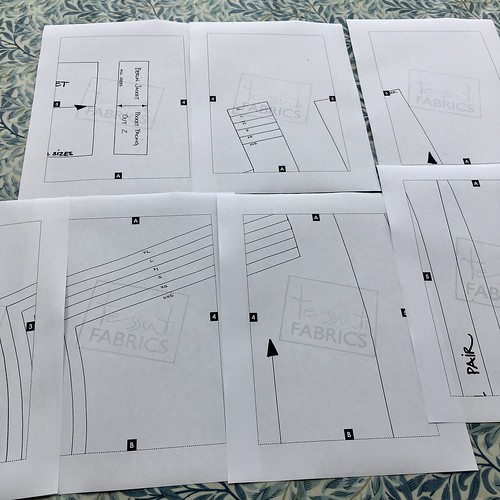 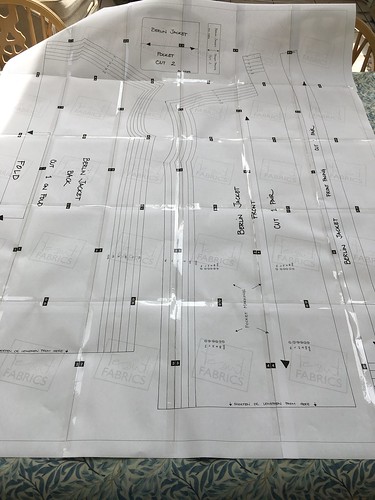 I checked the measurements and decided to make the medium size, I thought the sleeves might be too long but as the jacket has a drop shoulder and  couldn’t  work out where the seam would be I decided to shorten the sleeves once I could try the jacket on. 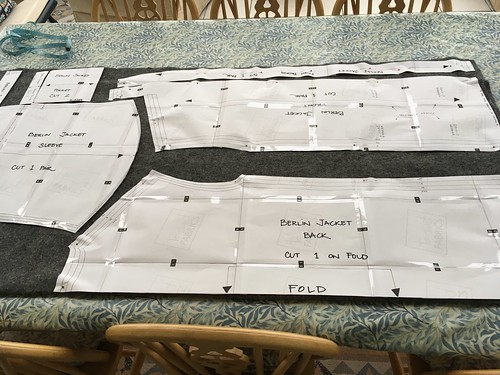 I cut out my fabric, making sure I had nice neat edges, the raw edges are visible so you want a nice clean cut for a professional finish.

The pattern has really clear step by step instructions. They suggest a walking foot on your sewing machine but I don’t have one. Sewing with the ordinary foot was the most tricky part of making the jacket, the overlapped seams tended to slip so I decided to tack everything. It was a good decision as the stitching would be almost impossible to unpick. 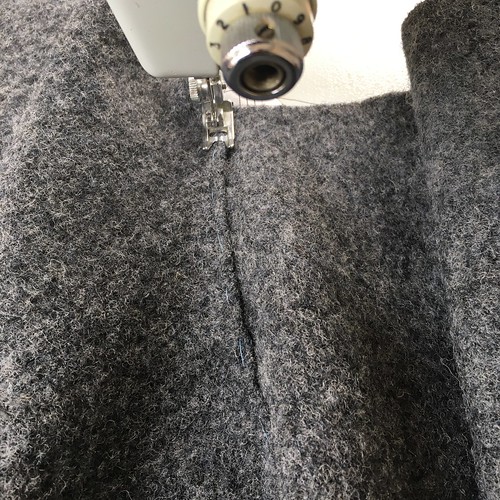 First the cuffs were sewn onto the pockets and edges trimmed.

Pocket were sewn onto fronts. 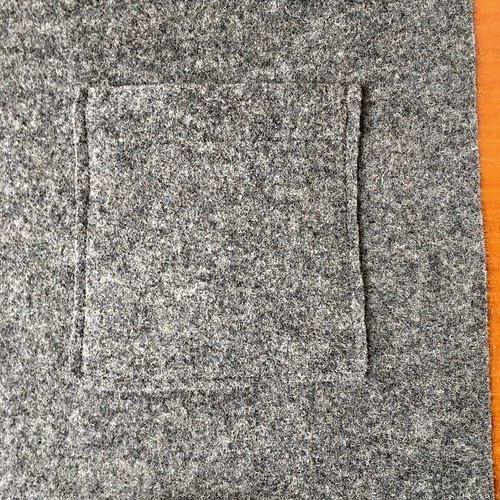 Back neck was joined, then shoulders and neckband were stitched to the back. 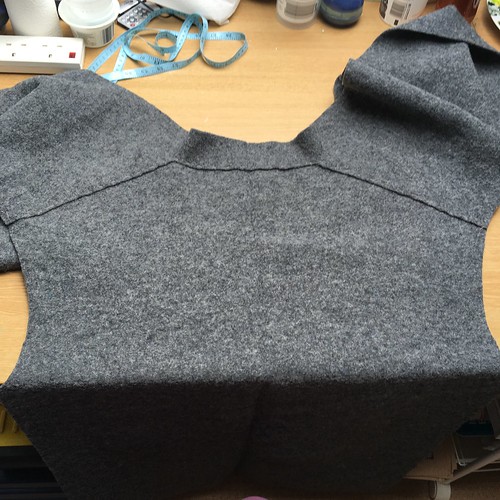 The facings were joined then stitched in place. 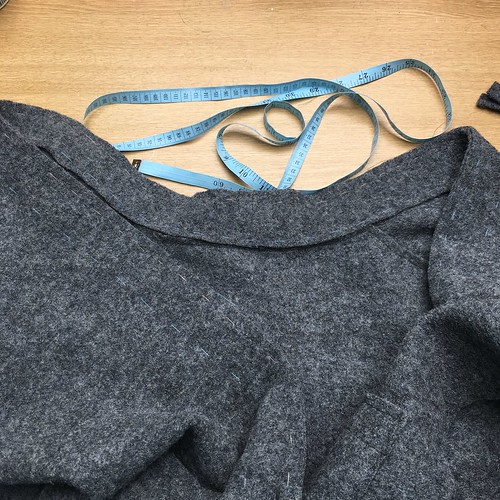 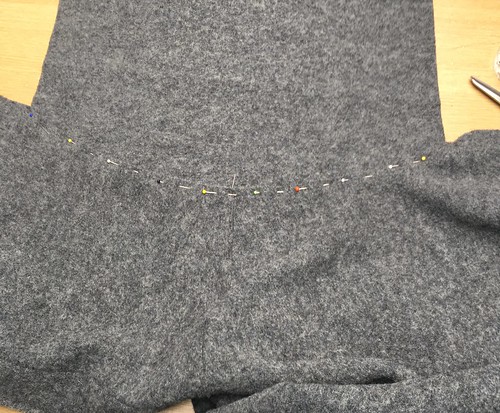 Next I tacked the side seams and tried on the jacket, I thought it was too big so I increased the seam allowance to an inch, and I shortened the sleeves by an inch. The seams were trimmed down and pressed open. A rolled up towel inserted into the sleeve makes pressing much easier.

You can see here the seam might be visible when wearing the jacket. 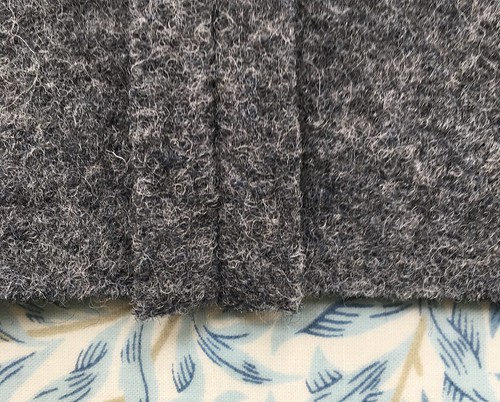 So I trimmed them as a slight angle, problem solved. 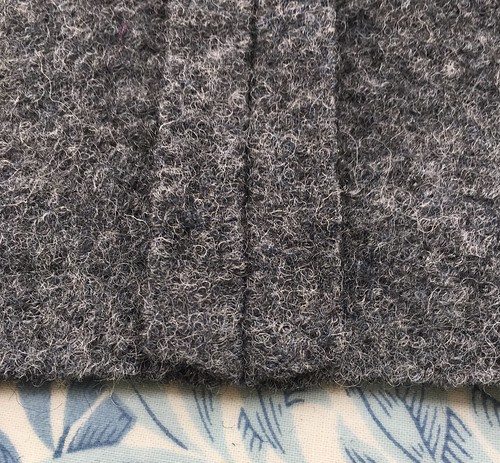 All that was left to do was sew on the cuffs and give it a good steam pressing. My Mum always said a good finish is all about the pressing. 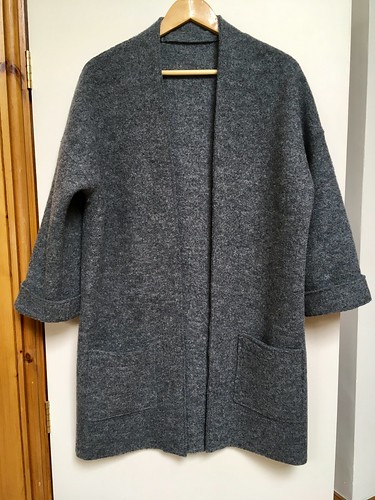 I love this jacket, it will be so versatile, and it’s very warm, cosy, and easy to wear. I might  make another bright coloured jacket. It seems the sewing bug has returned.

7 thoughts on “Making A Boiled Wool Jacket In A Day!”

What can we see from up here ? 😀
Today I’m batch cooking dinners for us and Dad. Roast Turkey breast and roasted roots, leeks to go in later. Chicken with pesto and Mediterranean veg, tin of cherry tomatoes and chicken will be added before it goes in the oven. I will cook the peppers separately as one of us doesn’t like them. Chicken chasseur traybake, needs chicken, wine, stock and tomato purée adding before it goes in the oven. 3 days dinners for 3 people cooked in an hour, and yes they all fit in my oven. 🙂#batckcooking #saveenergy #makingthemostofmyoven #happytummy #homecooking #homecookedmeals #usingupwhatsinthefridge
I didn’t make a great deal in 2022 because of hand issues but I did make these. Hopefully I will be more productive this year. #2022
%d bloggers like this: