I have missed not participating in the Art Elements challenges lately but life seems so busy these days. The theme this month is flowers.

Whilst sitting in the garden watching the bees on the lavender bushes I had an idea that I thought might suit the challenge but not take up too much time. It’s a little different to what you might think I would do for a flower challenge.

You may already know I like to make my own soaps, lip balms, lotion bars etc. One thing I find with soap is the scent doesn’t last as well as I would like. While I was sitting I was thinking if I could infuse my olive oil for soapmaking with lavender flowers, and would it last longer. Then I started thinking about the huge rosemary bush and some Corsican thyme that was flowering right by my seat. I love the way the smell wafts up when the breeze catches it.

I went to pick some lavender, which is not an easy task, the bushes are at the other side of a low fence, which I had to climb over. From here the ground slopes off to a wall and a 4 foot drop to the road. It’s a nightmare to garden, it’s south facing and dry so it has become a low maintenance rock garden, lavender thrives there.

I started cutting my flowers, I have 3 varieties of lavender but some looked past their best, I happily cut and smelled the flowers taking in their scent, then I felt my foot stinging, when I looked down I had ants crawling up my legs and biting my foot where they had gotten into my flip-flops. I made a hasty retreat with a meagre bunch of lavender flowers. It was so much easier picking the rosemary and thyme.

These were all left to dry for a couple of days before infusing in oil. The rosemary and thyme were put in a pan with oil and warmed up, then left to stand a while before straining.

The lavender flowers went in the slow cooker with the oil for a couple of hours, then it sat overnight to cool before straining.

The scent wasn’t as strong as I’d hoped but it was definitely there, maybe I needed more lavender, but I wasn’t going to pick more with those pesky ants about.

Next I set about making ‘crockpot’ castile soap (google to find tons of recipes) using my lavender infused oil. Here it is at the start of cooking, having blitzed it with the hand blender.

After about 40 minutes, (stirring every 10 minutes,) it becomes translucent, thick and jelly like, ready to go into a mould. I forgot to take the photo 🙂 but here it is cut into bars, it has a light lavender smell, I hope it lasts but only time will tell. 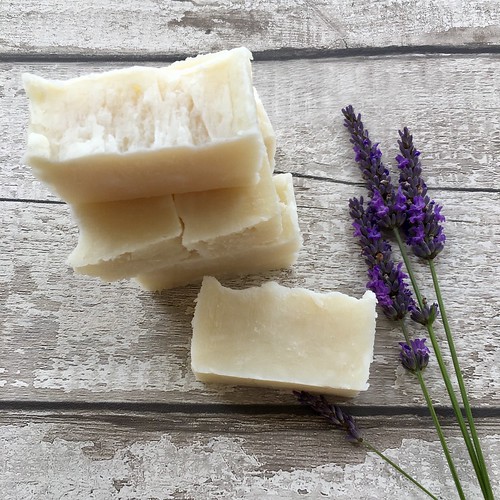 Back to the rosemary and thyme oil; my intention was to make some lip balm and use the rest for cooking but my family said they didn’t like it. So I could make more soap with it, or just use the oil on my hair and skin. My husband’s Aunt told me a long time ago rosemary was good for the memory, I believe the quote “Rosemary for remembrance”comes from William Shakespeare. 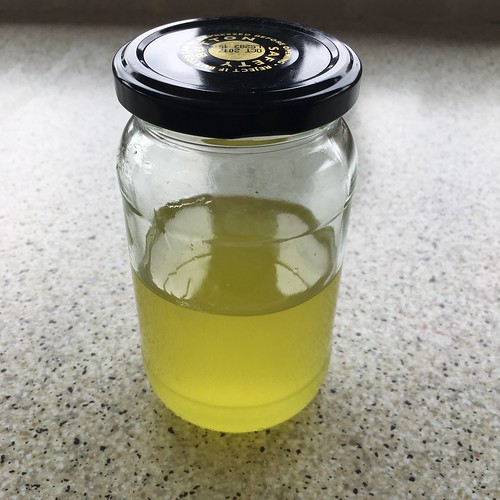 Having looked on the internet it seems to be good for a lot of things, I’m going to try it as a tonic for my thinning hair, it’s also good for arthritis and Raynauds syndrome which affects me in the winter. I think it smells, and tastes lovely, I like it drizzled on bread.

I made some lip balm, it’s 1 part beeswax to 1 1/2 parts oil, melted in a double boiler. I used a lot of lip balm last winter, it’s great for the hands as well. If it’s too stiff when it sets just melt it down and add a few more drops of oil. The little jars get reused, and are so easy to slip into your pocket or handbag.

Now I’m off to see what everyone has made for this lovely floral theme, why not go and take a look?

Pocket finds from a trip to the Solway coast. I am loving this palette. #inspiredbynature #pocketfinds #vignettes
Beautiful lush green ferns in Happy Valley, Northumberland 🙂
Making vignettes and colour palettes from my finds #inspiredbynature
%d bloggers like this: