There are problems with BT internet just now so everything is taking forever to upload, I did get some succulent planters and this ikebana bowl listed in my Etsy shop. The great thing is my pots can be used for both, or even for cacti. I got a lovely bunch of arum lilies for only £2 at Aldi today so I got my photo shoot done. Don’t they look great with the dark glazed pot? 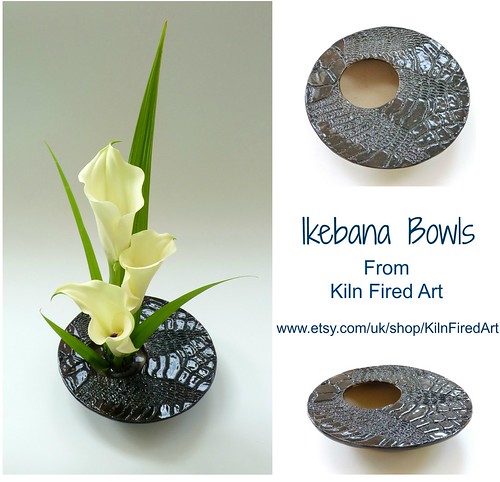 Some of these have gone off to the gallery along with some of my handpainted porcelain lustreware, that was stuck in the kiln when the electric went off.

I thought if I’m going to make and sell ikebana bowls I need a bit of an understanding of the artform so I ordered a pin holder or kenzan to fit one of my ceramic bowls, and also a book on the subject.

I was first attracted to ikebana in the 70’s , I think it was in a WI tent at the summer exhibition, but it’s something I’ve not tried. I know the simplistic line and form could kid one into thinking it’s easy, but it’s not, as you will find out if you continue to read about my meagre attempt.

I decided to have a go at the first arrangement in the book, Risshin – kei or basic upright style. The book tells you that the length of your 3 main branches, the shin, soe, and hikae should be as follows:

Shin – width of container + depth + half as much again

So I duly worked out the sizes and rounded them up to the nearest cm, and wrote the lengths on my hand. Armed with secateurs and a ruler I headed off into the garden to see what I could find.

My first choice was the silvery green leaves of the senecio bush  but I found them to be just too droopy when I had to place the branches at precise angles. Actually this was , I found the hardest part of the process. The shin had to be upright but bend slightly to the wide part of the container, with the tip at a 10 degree angle from vertical. The soe should go at the right front, at a 45 degree angle, and the hikae left front at a 75 degree angle. I gave up on the senecio and cut some copper beech foliage, but no matter how much I tried to place these stems at the correct angle they just sprung out of shape.

Now I had to add  jushi, the  flowers, so far I haven’t read enough to know how many but 3 is a good number, right? I did read they should be at different heights and none longer than the main stem. So off I went back into the garden looking for some blossoms, unfortunately there wasn’t much that I thought suitable so I went with this pink rose, which I really don’t care that much for, it’s such a harsh colour don’t you think, but it flowers profusely and the foliage is good. I thought it appropriate to choose flowers in different stages of bloom to add interest. The flowers were easier to place than the main stems, they should be angled so they face the viewer.

So here’s my first ikebana arrangement, I’m not sure it works very well, I think the beech leaves are too large and you know how I feel about shocking pink.

I think I need a lot of practice, and never be fooled by a simplistic flower arrangement, like most artforms less is more. 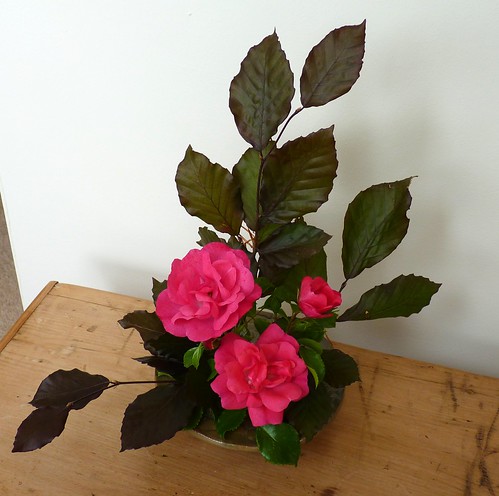 I think I will head out with the secateurs once more and see if I can find some stems with smaller leaves and have another go, I’m going to practice over the summer.