As you may know already I’m dabbling with sourdough, I try to keep baking to the weekend taking Hercules ( my sourdough starter) out of the fridge on Thursday for dough making on Friday (after a couple of feeds) then baking on Saturday morning. I make more dough on Saturday for baking on Sunday. Hercules is fed then returned to the fridge.

Where does the name come from you ask? To stot something is to bounce if off something, like “stotting a baall off the nettie waal”, or “it’s stotting doon ooutside”, meaning  bouncing a ball of the toilet wall ( in the days of outside loos) or in the latter, it’s raining heavily.

Here’s my recipe, I thought I would have to make a few to get it right but actually the first attempt was pretty close to what I wanted.

Mix the dry ingredients except milk powder in a bowl.

Mix the  milk powder and water, stir in the discard and the oil.

Pour into the flour mixture and bring together into a rough ball. Let it rest 10 minutes. 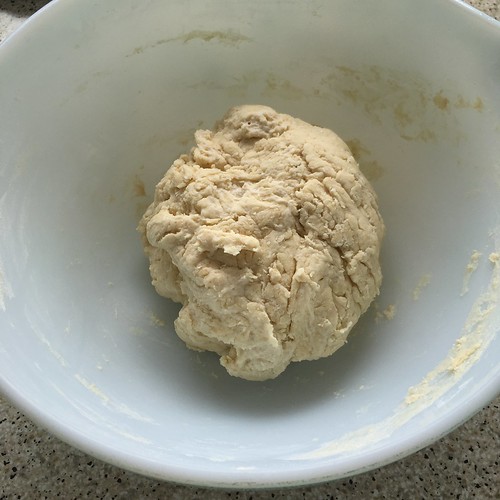 Tip onto a floured surface and knead until smooth. Leave to rest covered with a damp tea towel for  minutes.

Flatten out with your hand and put on a baking tray, poke a hole in the centre, and prick with a fork ( I forgot to do this). Leave in the fridge overnight. 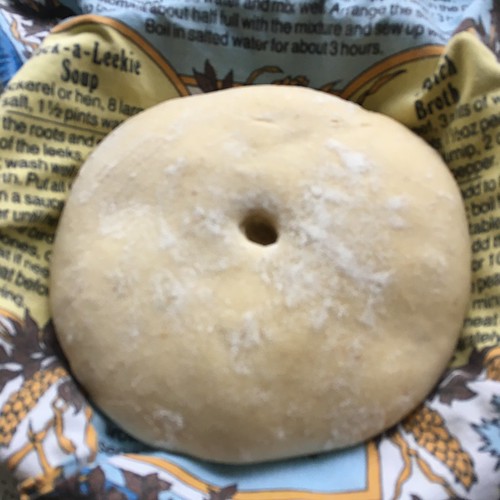 In the morning bring out of the fridge while the oven heats to 200C. Put a tray of water in the bottom of the oven. Pop the stottie in the oven and bake for 15 minutes, turn over and bake another 15 minutes.

It should be cooked, I like to check the internal temperature is about 98 C so I know it’s done. Wrap in a tea towel and leave to cool. 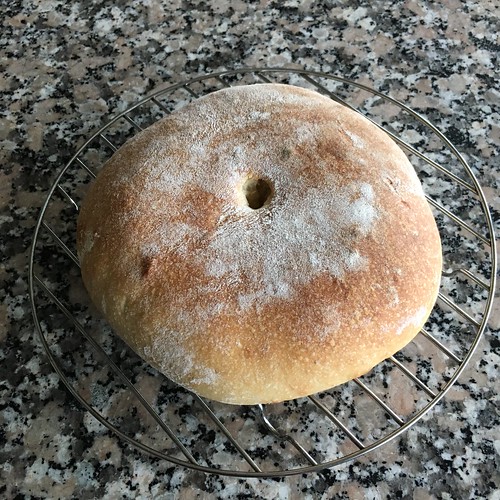 I made some quick pease pudding to eat with my stottie cake. I soaked yellow split peas overnight then rinsed and put in a pan with water and a stock cube, boil until the peas mush. Keep an eye on the water level and top up if needed. I like a bit of texture so didn’t go completely mush, but I blitzed with a hand blender. As the pease pudding cools it thickens up and becomes spreadable. 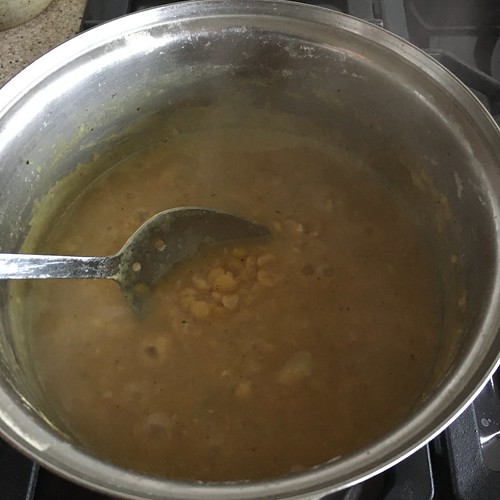 Traditionally the peas would be tied in a clout (cloth) and put in a pan of vegetables, water and bacon bones or ham hock to make pea soup , the peas thicken the soup and the peas in the cloth take on flavour from the stock. 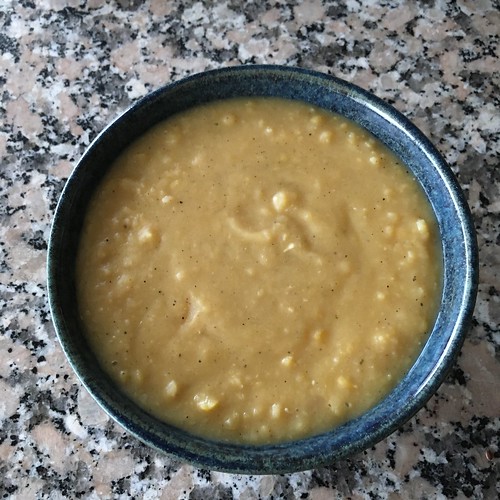 For a miner’s family this would be 2 cheap filling meals for very little money especially if they grew their own vegetables, pea soup and dumplings and ham and pease pudding sandwiches. My quick version is still very tasty, you can add other things like bacon pieces or onions but we had it plain.

The texture when I cut into the stottie looked right, just a little dense but not too heavy. 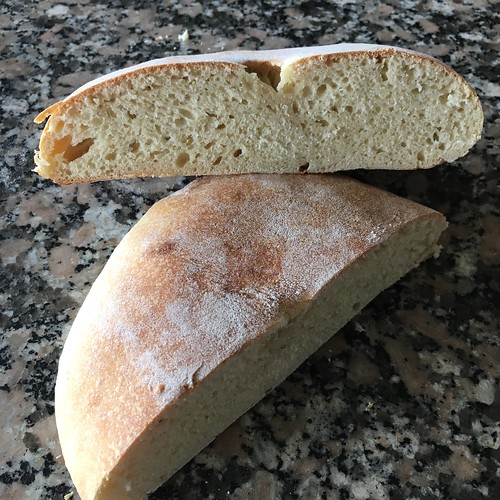 It tasted great, just as I remember it. 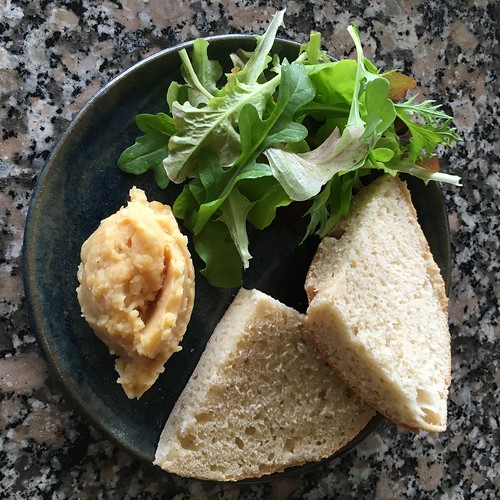 The next day I made another stottie cake but cooked it differently to see if I could get a crust like a shop bought stottie. It was cooked in a cast iron pan then put in the oven to finish off. While it was in the pan I realised why they have a belly button, it lets the steam out and stops it puffing up like a pitta bread. 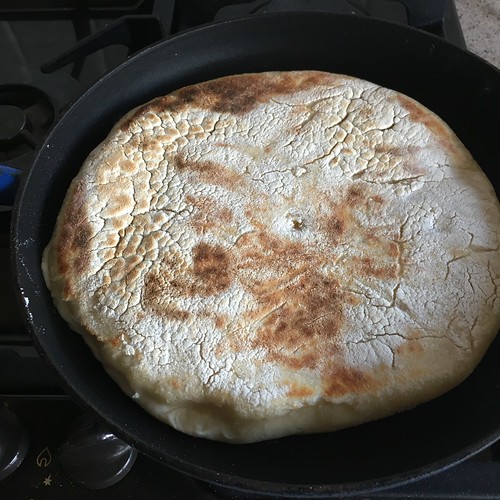 It came out more stodgy, but the crust seemed to have the right texture. 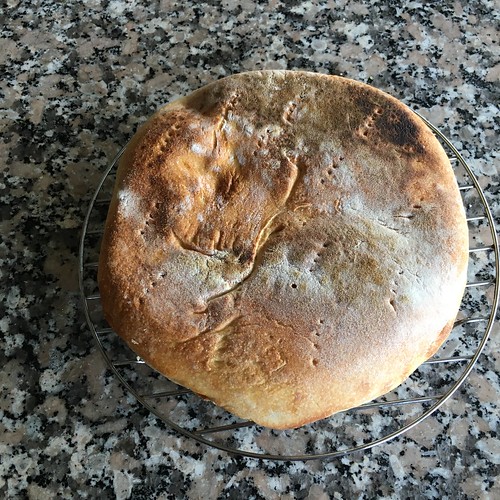 It tasted good but I do prefer my Gran’s stottie cake. 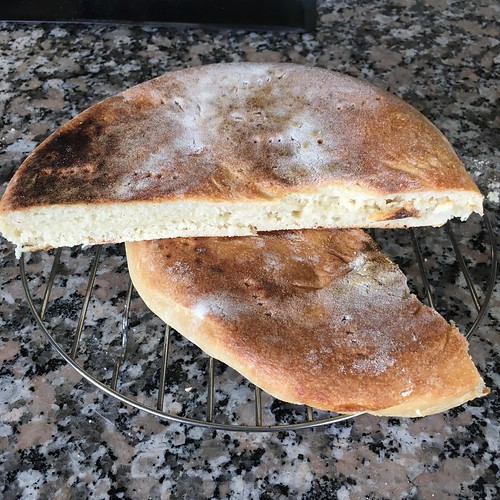 Stotties will be a regular feature of my sourdough baking in future, I wonder how my Gran would rate them 🙂