This week we braved to weather, which was cold but still, to do our first raku firing of the year. It’s always exciting and unpredictable, hopefully in a good way. This time things started off really badly but we sorted the issues and re-fired the first couple of pieces. We also had a few breakages but you come to expect that it’s the nature of raku work.

Here are some leaves that have made it into my Etsy shop, I had a few customers waiting for new stock to arrive so they are going quite quickly.

I have restocked the small raku fish and there are a few larger fish as well, these ones have a lot of copper, the others are turquoise and blue.

I have a few moon gazing hares too, these would be great Easter gifts to let someone know you miss them.

The snowdrop trinket dishes and hearts that I showed you a few weeks ago are in the kiln now, I can’t wait to open it up but it’s still cooling down, patience pays off in the end.

I am watching things growing in the garden, soon the bluebells will be out, I have some pulmonaria flowering but no sign of the brunnera flowers yet. It’s going to be a busy time in a week or two, watch this space. I like working with the seasons.

After waiting for a month the rain finally stopped just long enough to get a raku firing  done.

This batch of ceramic leaves have particularly good colours, don’t you think? 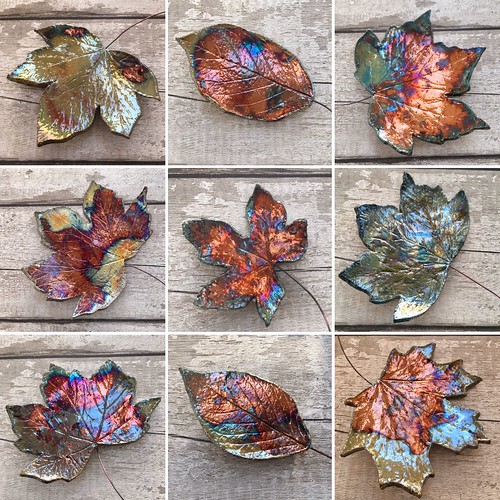 I hate keeping my customers waiting but hopefully they understand the slow nature of ceramics, especially when you have to wait for improvements in the weather to do a firing.

My ceramic leaves can solve a specific need in interior decor. Some of my customers send me photos of how they are using my leaf wall art on those awkward walls above a window, around an arch, above a doorway, up a staircase. I can’t show you photos of my customer’s homes but I can show you my leaf art installation which hangs on a narrow wall between two windows. I love the way it connects indoors with the outdoors. 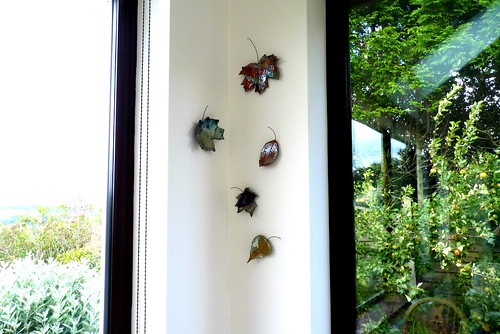 I have added a few more leaves since that photo was taken. That’s the beauty of having a ceramic leaf art sculpture hanging on your wall, you can keep adding to it when you feel the need. I would love to make a large leaf art installation one day, I wonder which wall I could use, maybe up the staircase.

Some of my leaves are heading off to their new homes this week but there are still some available in my shop and I will be glazing more this weekend. I wonder how long I will have to wait for the next dry day to fire the next batch of leaves? Hopefully not too long.

On that note I will leave you with some more eye candy, do you have a favourite leaf? 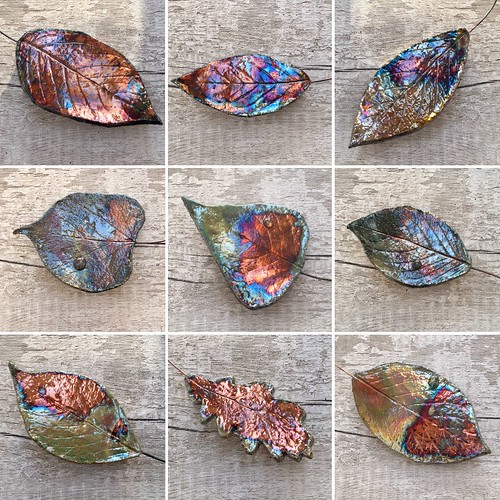 If you look at KilnFiredArt on Instagram or Facebook you can see some videos which show how gorgeous the colours are and how they change in the light.

We braved the cold weather earlier this week to have a raku firing. It was cold but bright and most importantly there was little wind, which helps the firing process, but also we managed to stay warm.

I had lots of small fry to fire, about 80 in total. It’s a bit fiddly lifting them in and out of the kiln so I tried some on a bead rack. Unfortunately they didn’t get enough flame in the combustion bucket so I went back to firing them individually. 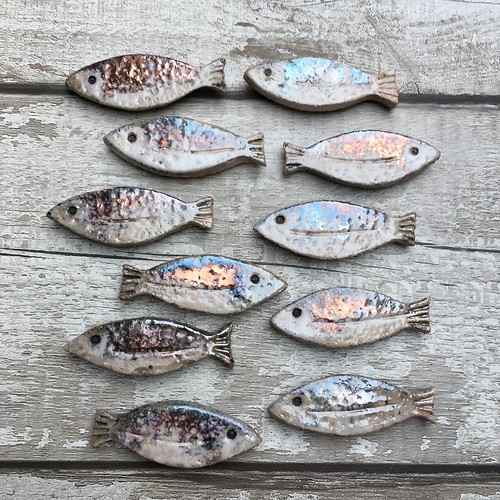 Next came the mackerel, if you remember last time a lot of these cracked, this time we cooled the kiln down more between firings and went very slowly in heating up and they were fine. 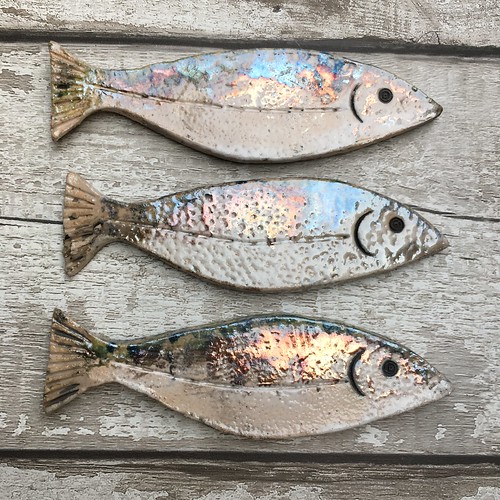 I made a hanging hare as an experiment, I was concerned about the ears and feet breaking but they didn’t.  I felt the hare could be blacker so it was cold painted just to get the dark really dark. I think it worked well, now I have other ideas brewing. 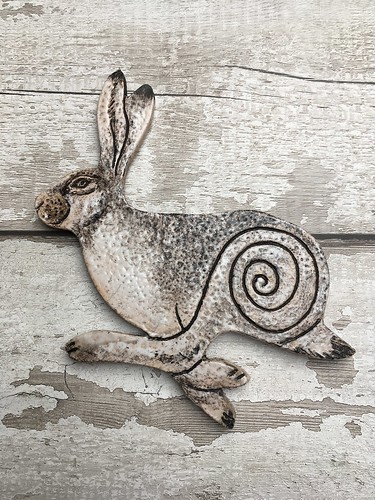 I was asked if I made butterflies so I did 🙂 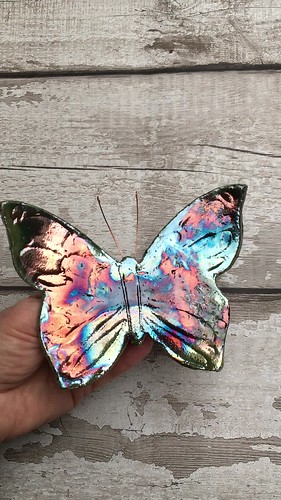 I used some new glaze combinations on the fat fish, I love these, it’s  going to be hard to part with them but they have gone into my shop. I will be making more of these soon. 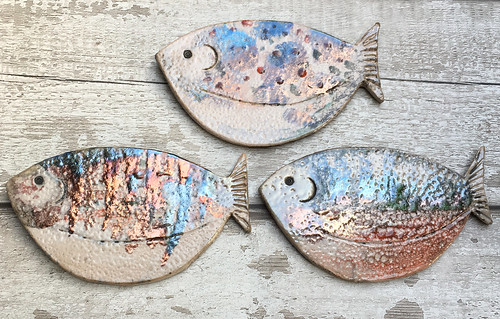 And of course I can’t  have a raku firing without making more leaf wall art. I never tire of making these leaves and I love the way each one is unique. There will be another raku day tomorrow then I  will get some leaves and bowls listed. The hare and butterfly have now sold so I will have to get cracking and make some more.

This past week the weather has turned, we have had plenty of rain and it’s back to dull Autumnal weather with sunny spells.
I’m not complaining though, my beloved fells need water to green them up, although it’s almost time for the bracken to turn bronze again. I love the changing seasons.
I did have plans this summer to throw as much as I could and bisque fire so it was there to glaze during the cooler months. This also doubles up in heating the studio making it more inviting to work in when it’s horrible weather.

Who would have thought the weather would be so good this summer? However having so many family celebrations, and travelling quite a bit meant the pots didn’t get made.

So this week it has been back to work in order to catch up. At least we can raku fire responsibly as there is little risk of a field catching fire now since all the rain came down.

I have been making leaves which are drying nicely. 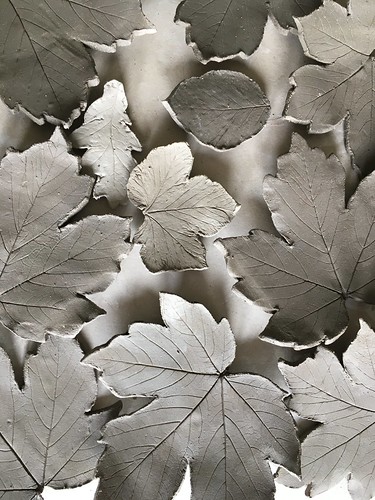 I have lots of bowls waiting to be glazed too, so as you read this I am probably tucked up in the studio listening to Bad Company (my music of choice when doing clay work)  a brush and a pot of glaze to hand. 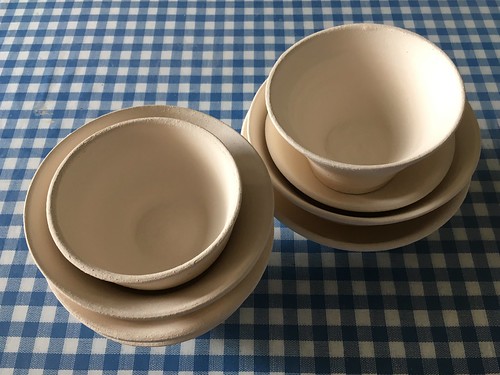 While I was tidying up this morning I was thinking about what to make next. I have to think of something inspired by swirls for the Art Elements challenge. I have a couple of ideas but nothing is shouting out at me.  Also I would like some dinner plates for Christmas so it’s time to try again, hoping they don’t crack this time. Then there is another bag of raku clay to throw, and my kitchenware pouring bowls are in demand. Told you there was lots of catching up to do…….

I can’t believe it’s the end of August already and I’m seeing the month out on a high.
It didn’t start so well, the weather has been dreadful but in the end I had a wonderful day raku firing last weekend, we managed to do 11 firings in the day so that made a bit of room in my studio. 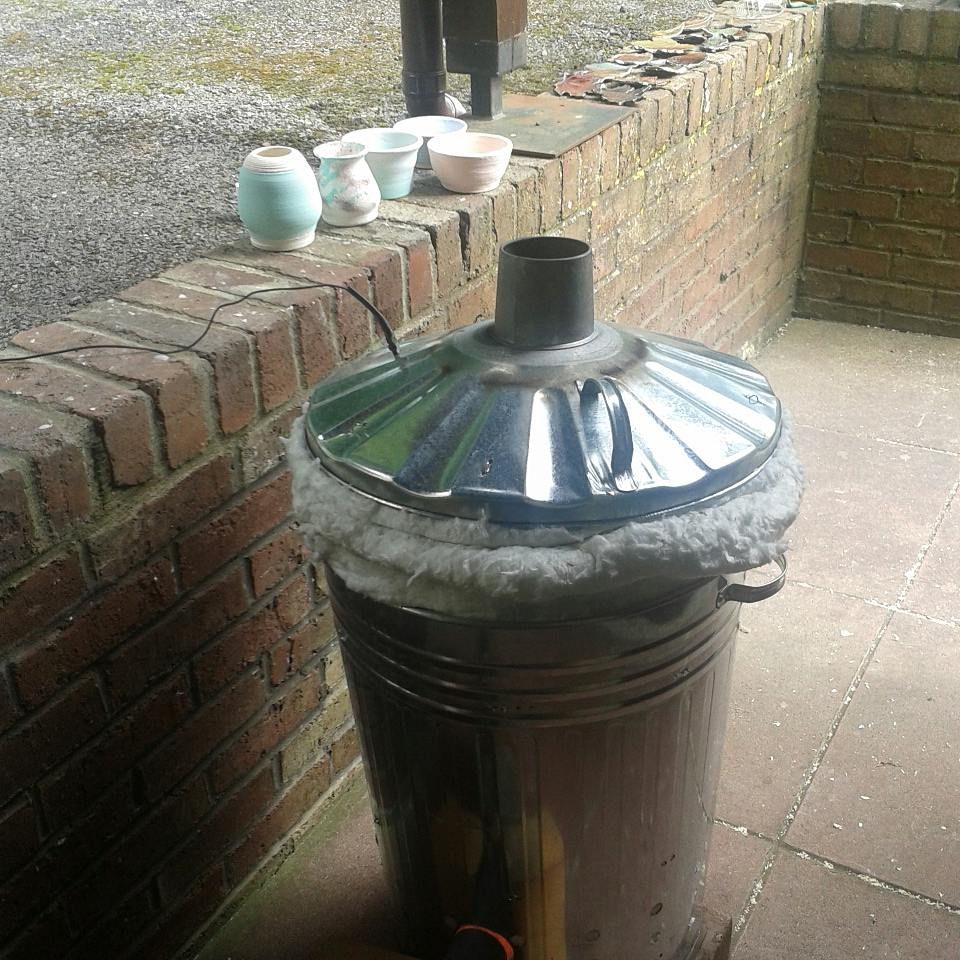 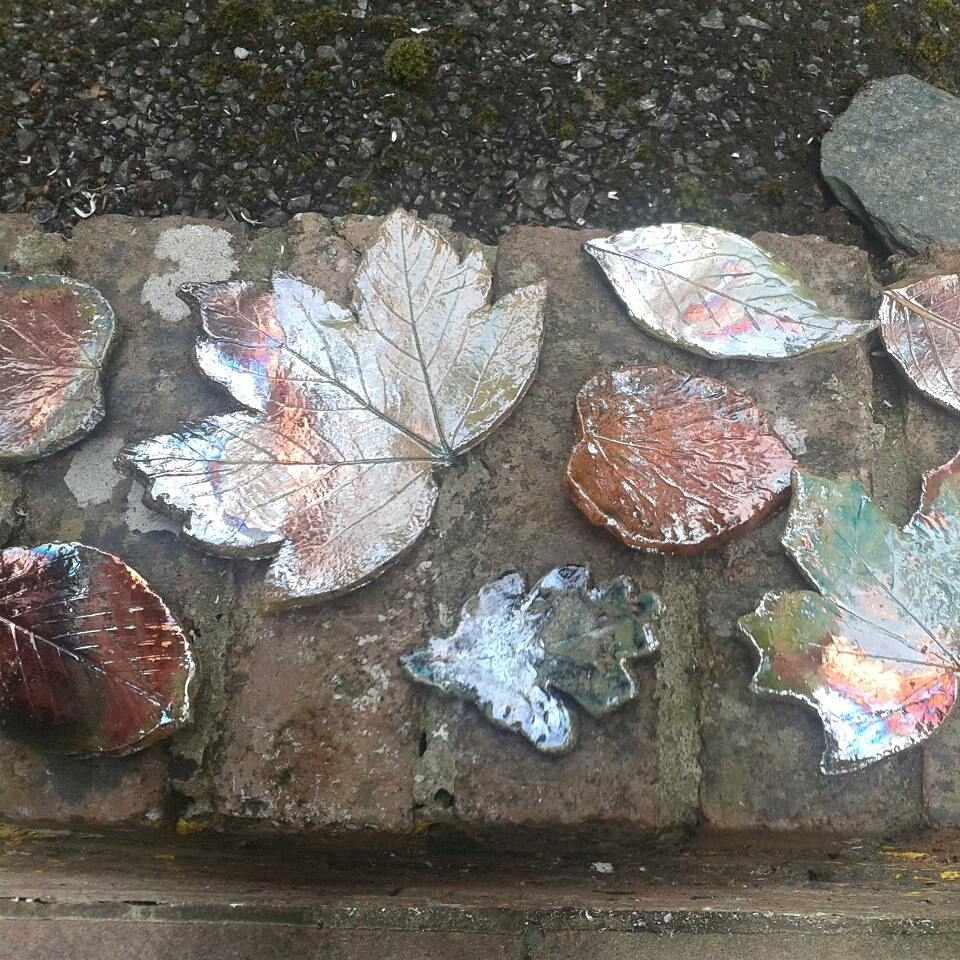 The month didn’t go completely to plan as I still haven’t fired the dinner set. I glazed a few vases with some of the combos from my test firing experiment. I was so disappointed when I opened the kiln. The glazes didn’t do what I’d hoped for. 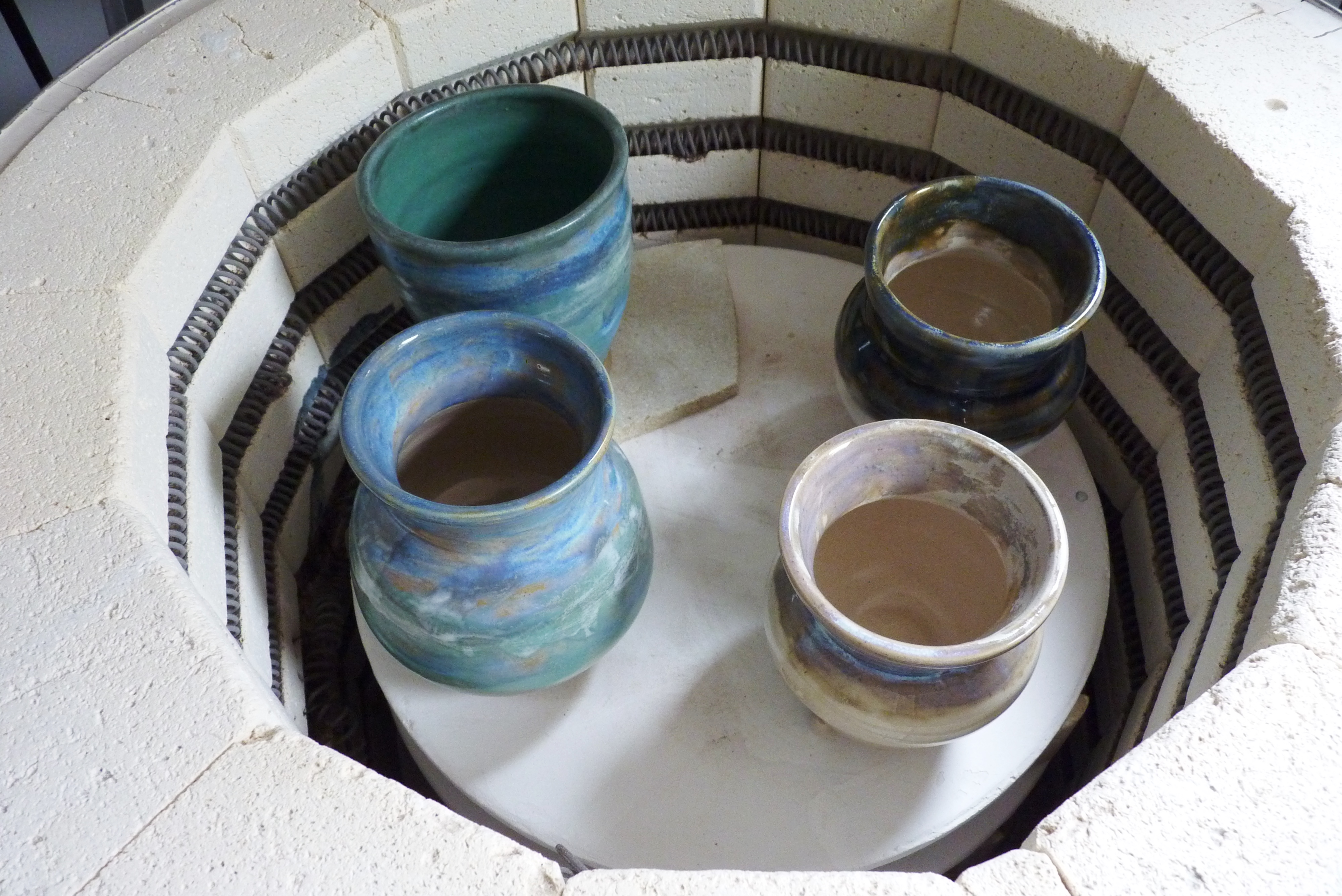 I did get some wonderful pieces from the raku firing though, including all these leaves which seemed to fit in so well with the bank holiday weather, the rest of the country was basking in sunshine but it felt like Autumn here. I even stood with an umbrella over the kiln for a time. 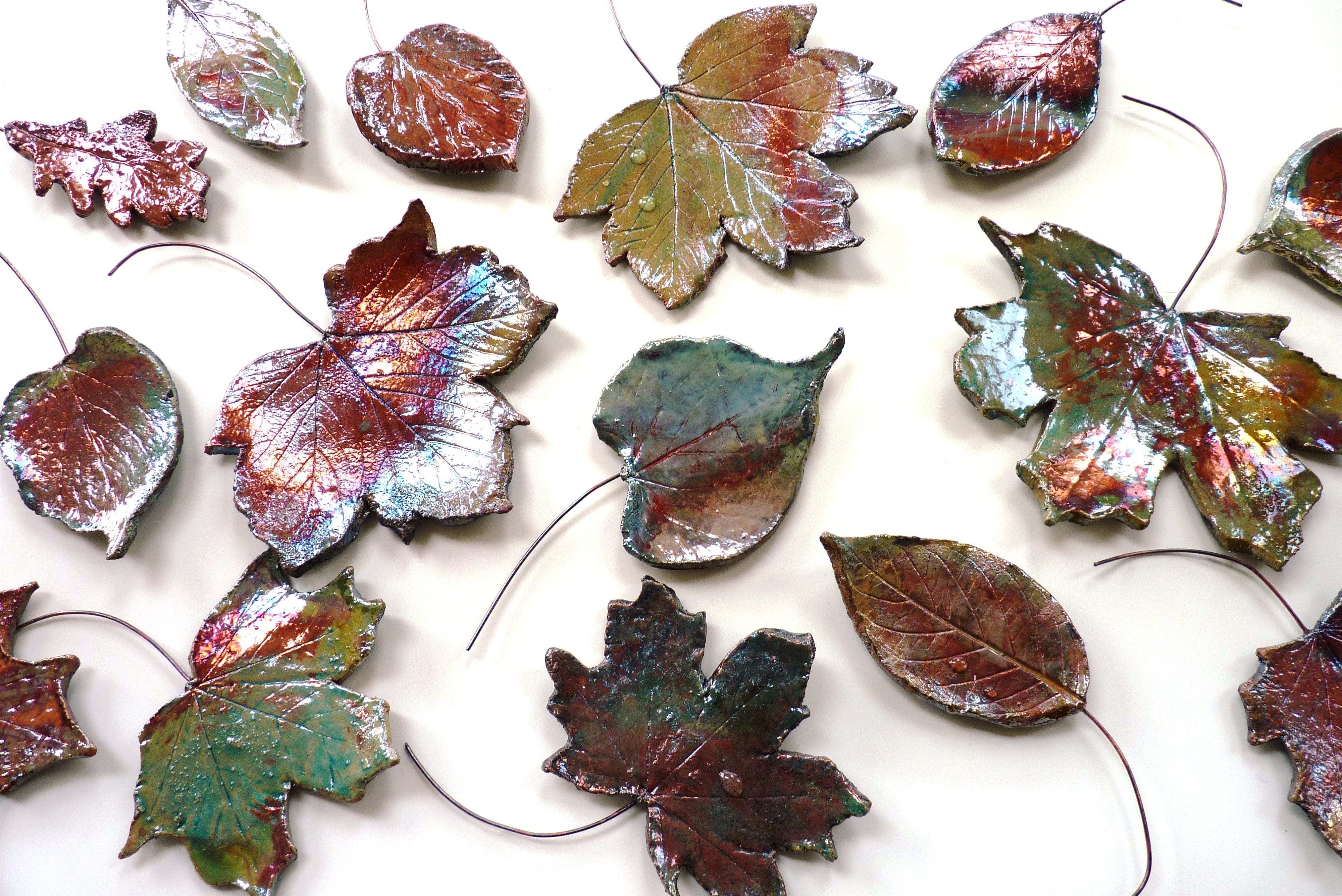 I think this leaf is gorgeous. 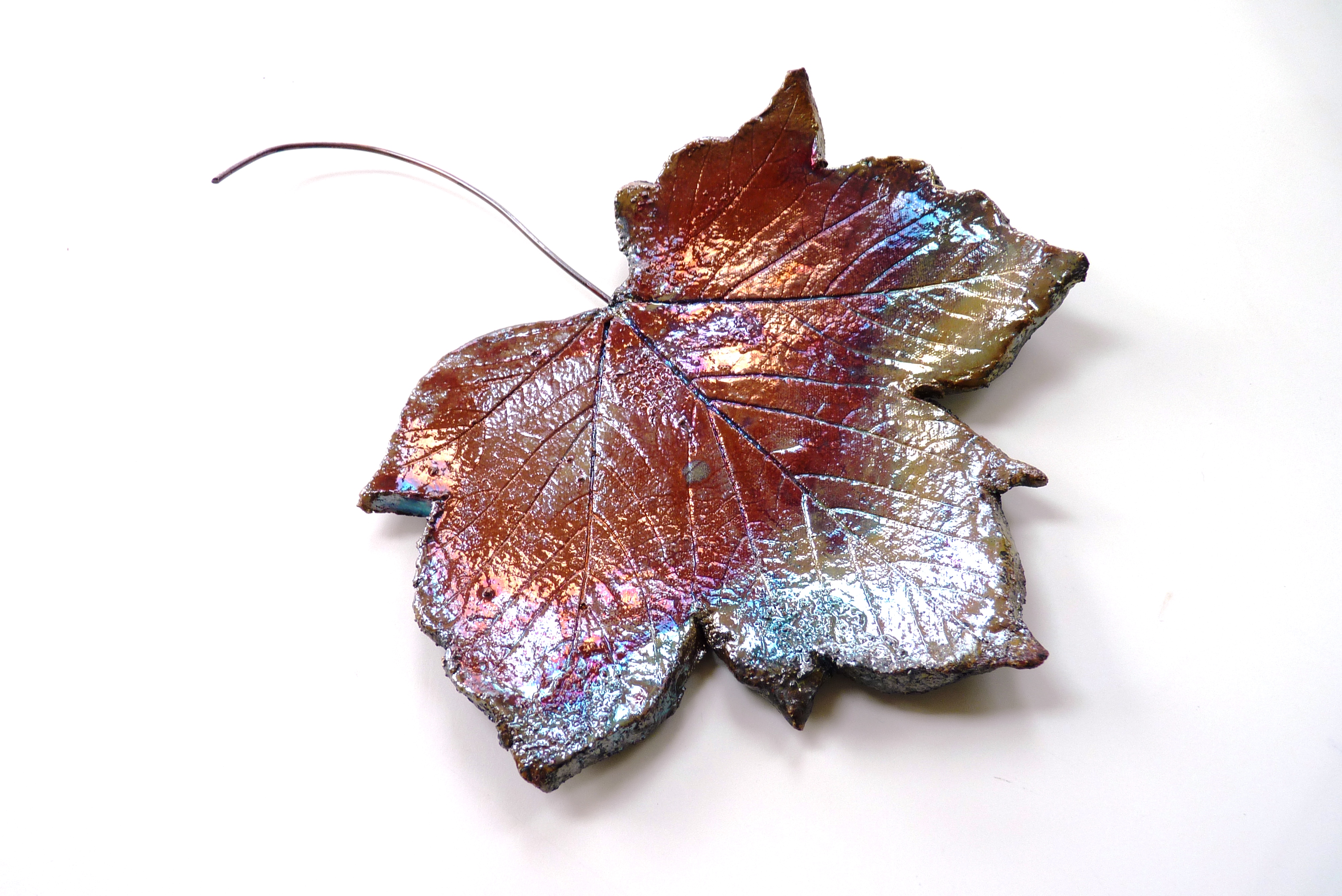 I fired rather a lot of small bowls and some pots too, some made me squeal with excitement. I have decided although I love them all I’m going to have to sell some to make more so they will be on my Facebook page hopefully on Sunday.

I made a lot of little bowls, this is my favourite 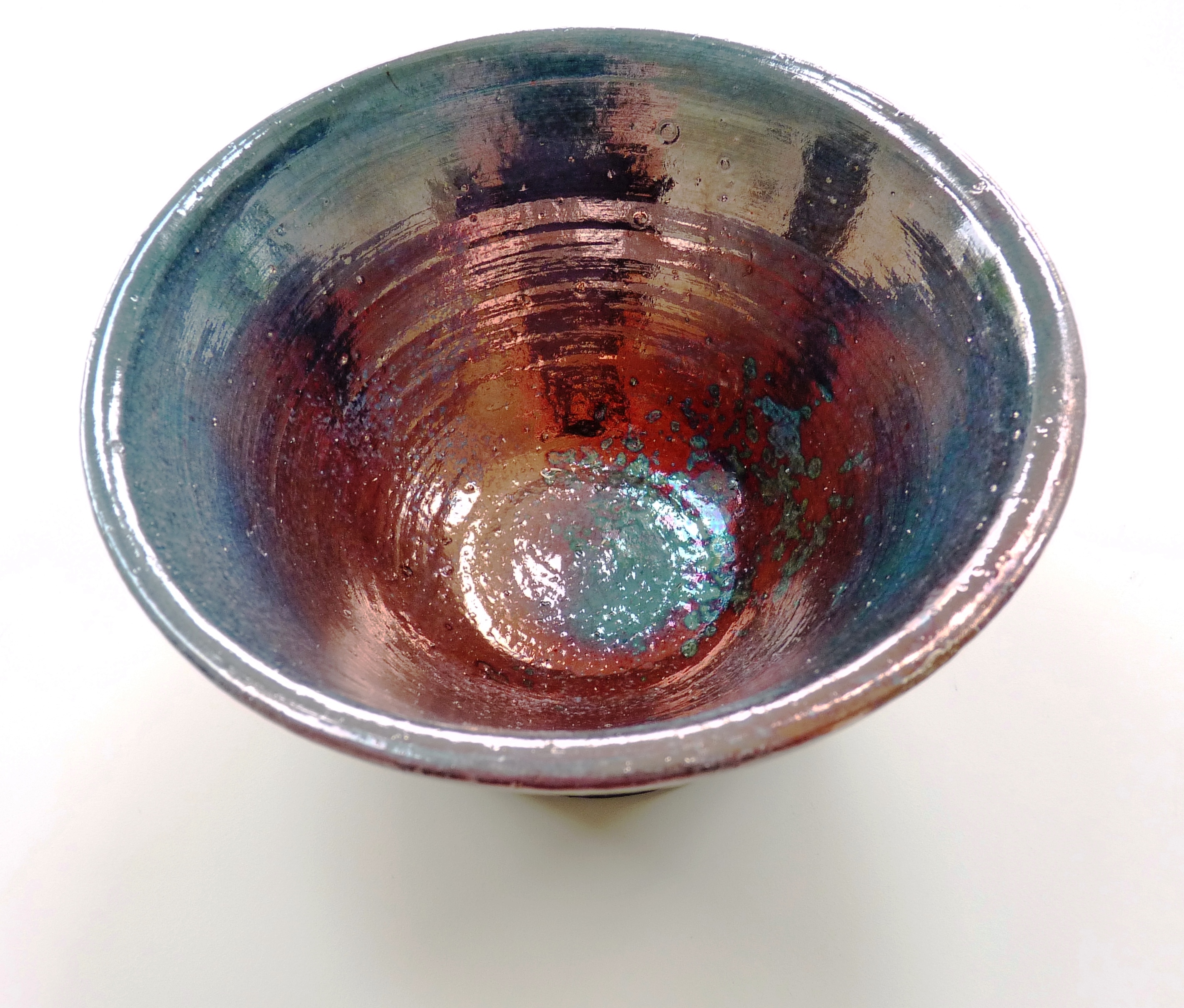 And some pots, the colour on this one was a surprise 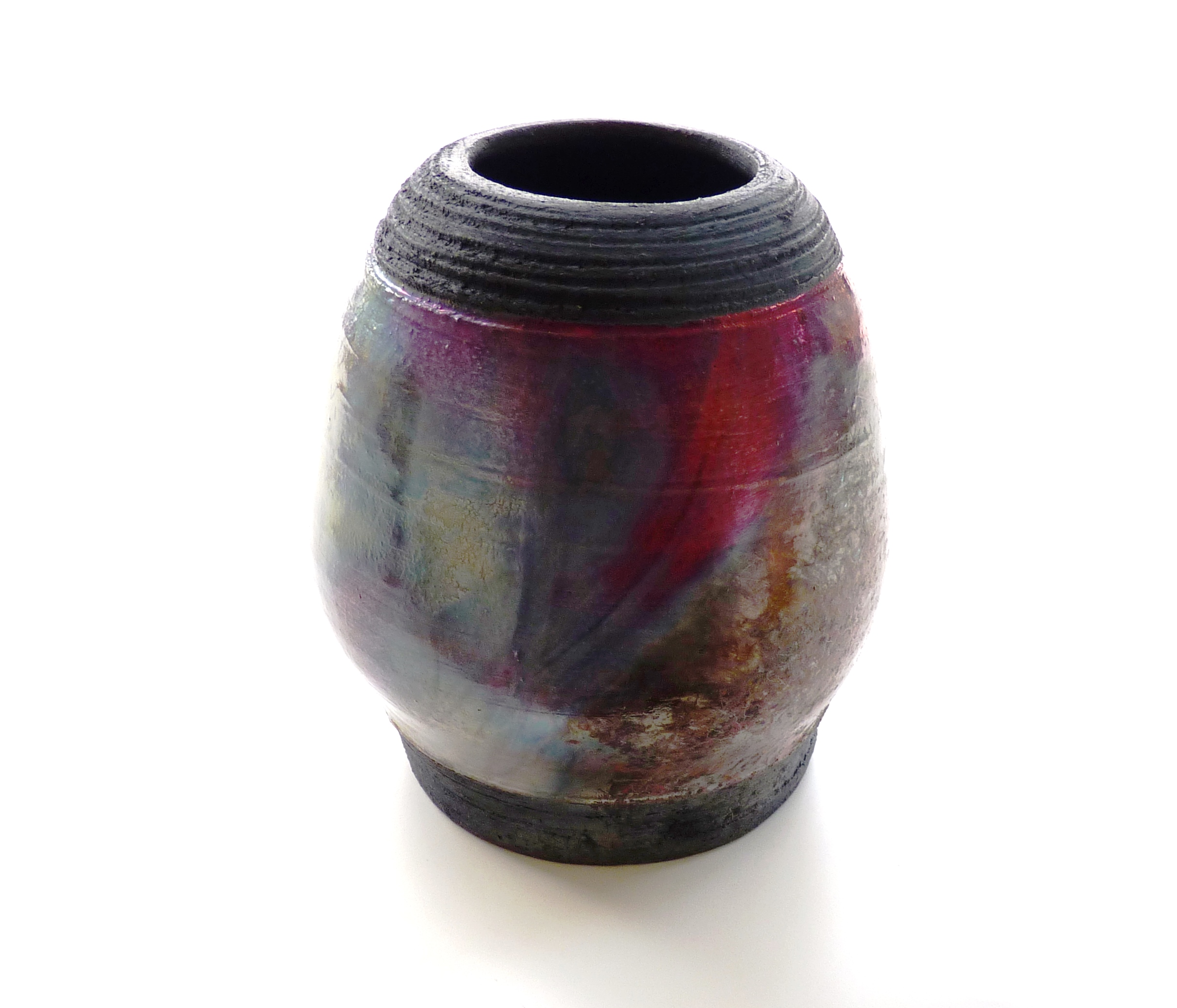 And a lovely coppery one, which was fired twice, the first time it just looked a bit mediocre. 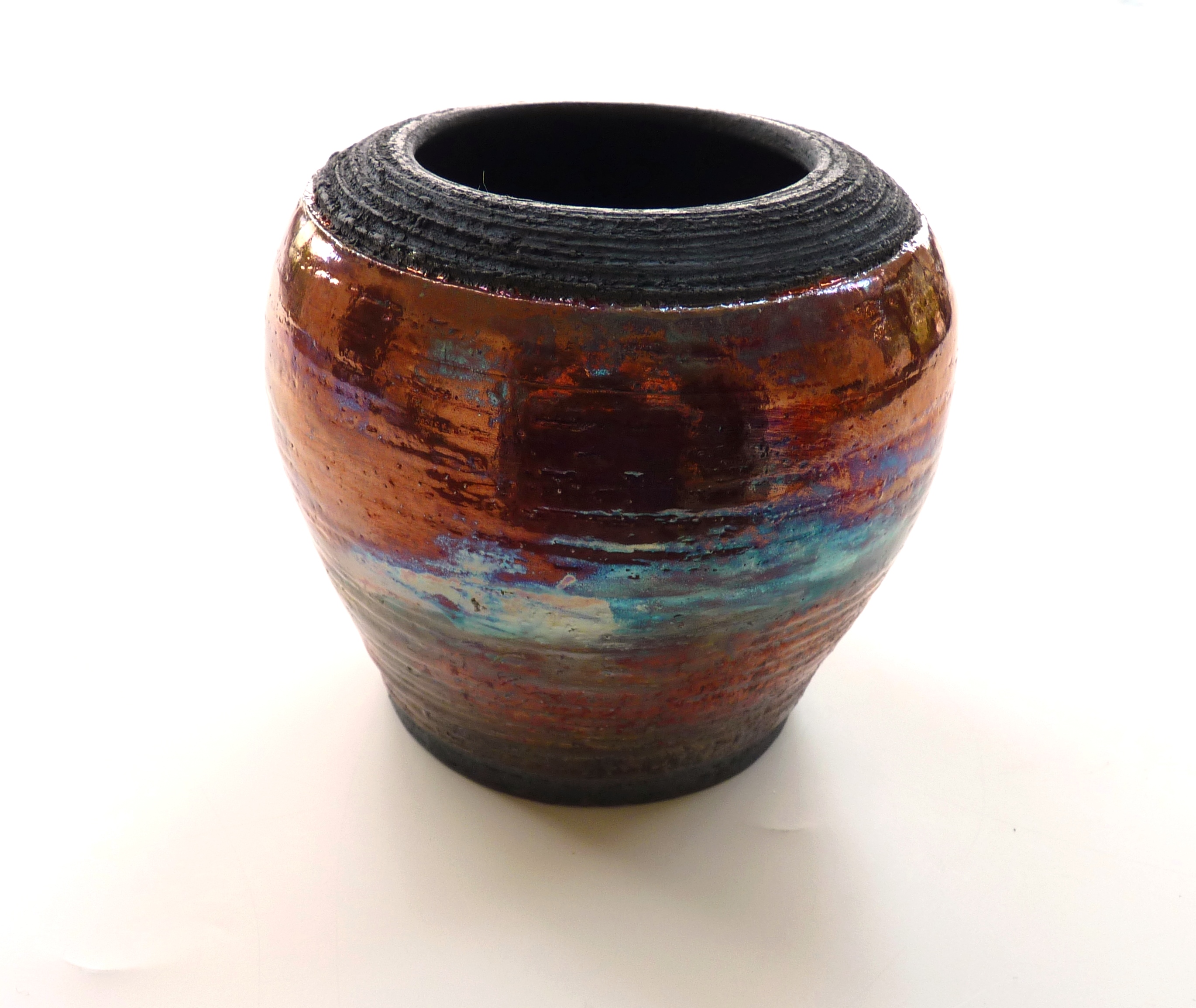 Oh, and my dish, I love this ,it will be hard to part with it so I’m kind of hoping no one buys it but if they do I can buy more glazes and make some more. 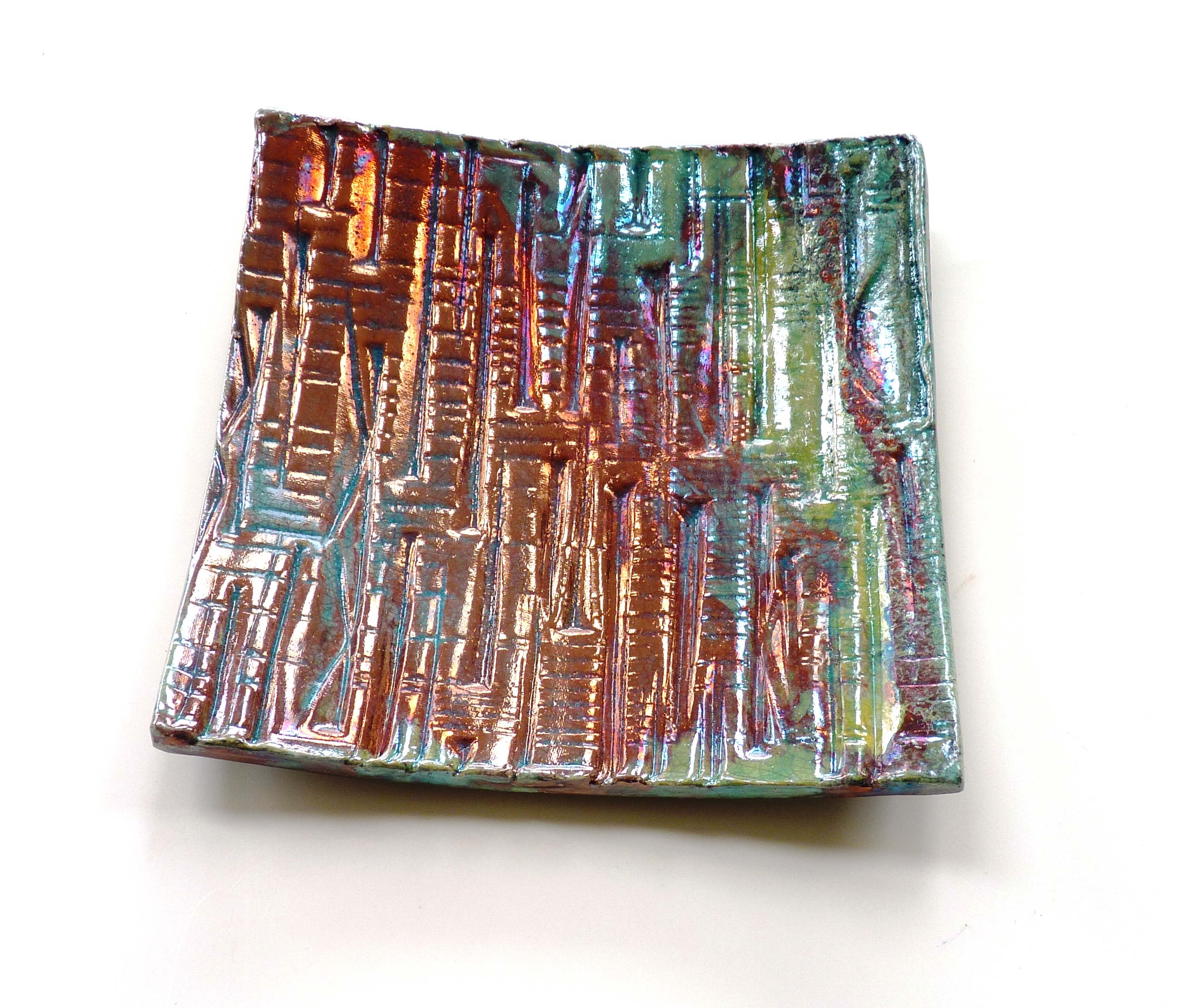 Two pots ‘kissed’ in the kiln , you can just see a mark near the base where the glaze came off. But I think these marks showing the making process just add to a raku pot don’t you? 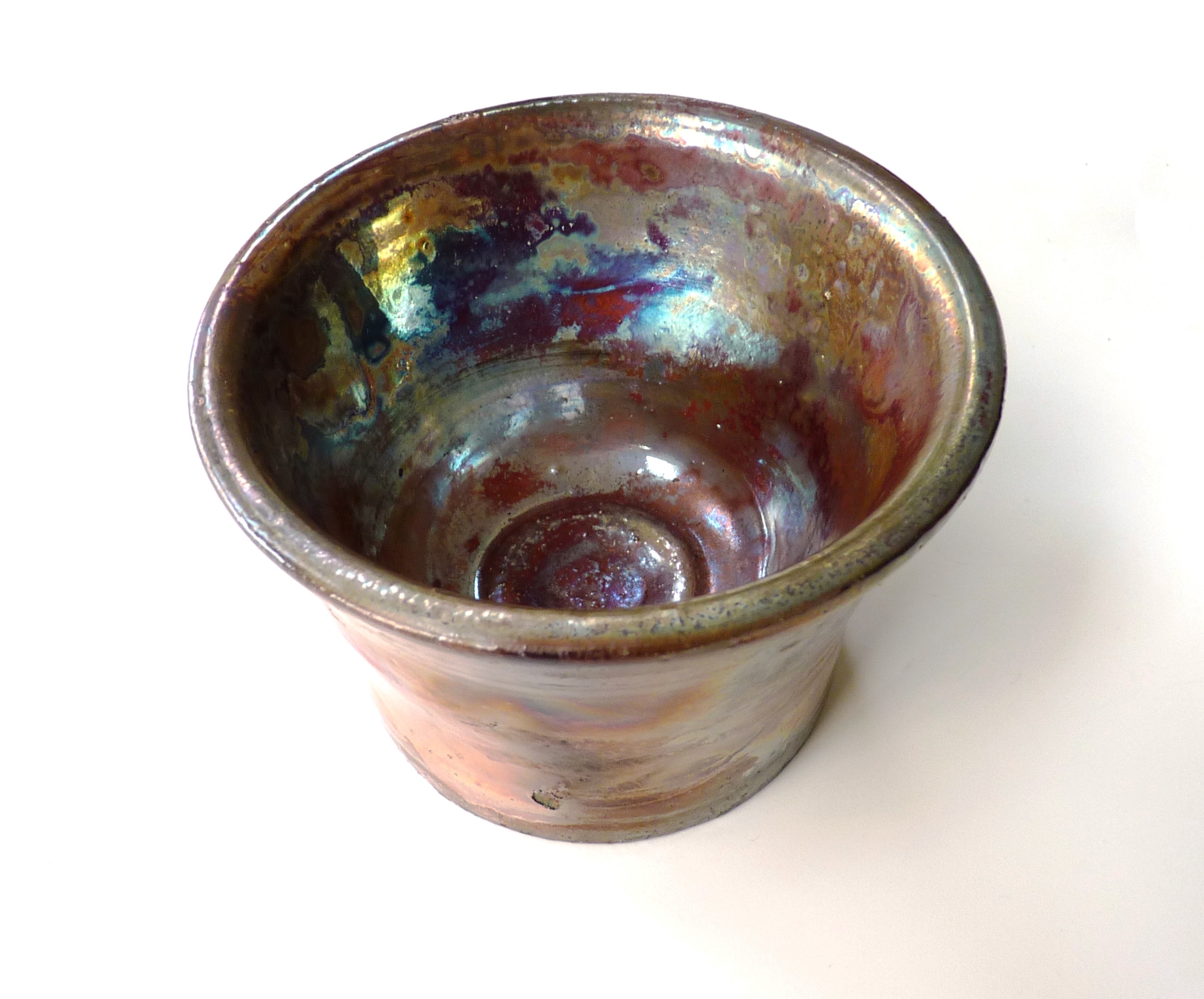 There was a weird thing happen with this leaf, the one I used to stamp into the clay had some black paint on it, obviously I’d used it for another project but I thought it would just fire away, it didn’t. I’m not so sure I like the effect on this leaf but it’s good to know that china paint might hold under a raku glaze. 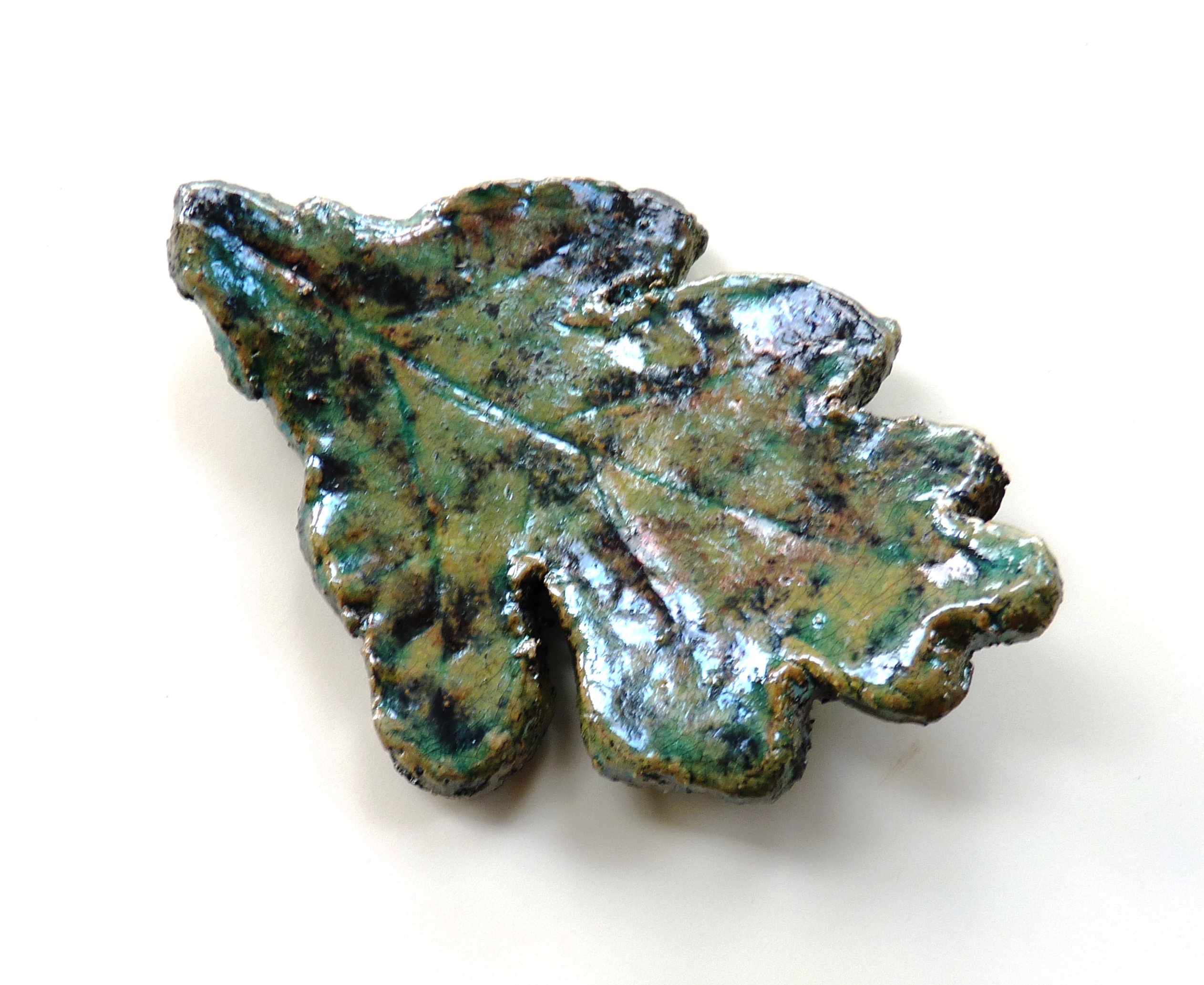 There were a few breakages too, this vase is very heavy in the base, it actually flew off the wheel when I was throwing it , I should have dumped it in the bucket but I decided to alter the shape and fire it to see what happened. It cracked. But I love the effect on the front, it reminds me of a lightning storm. 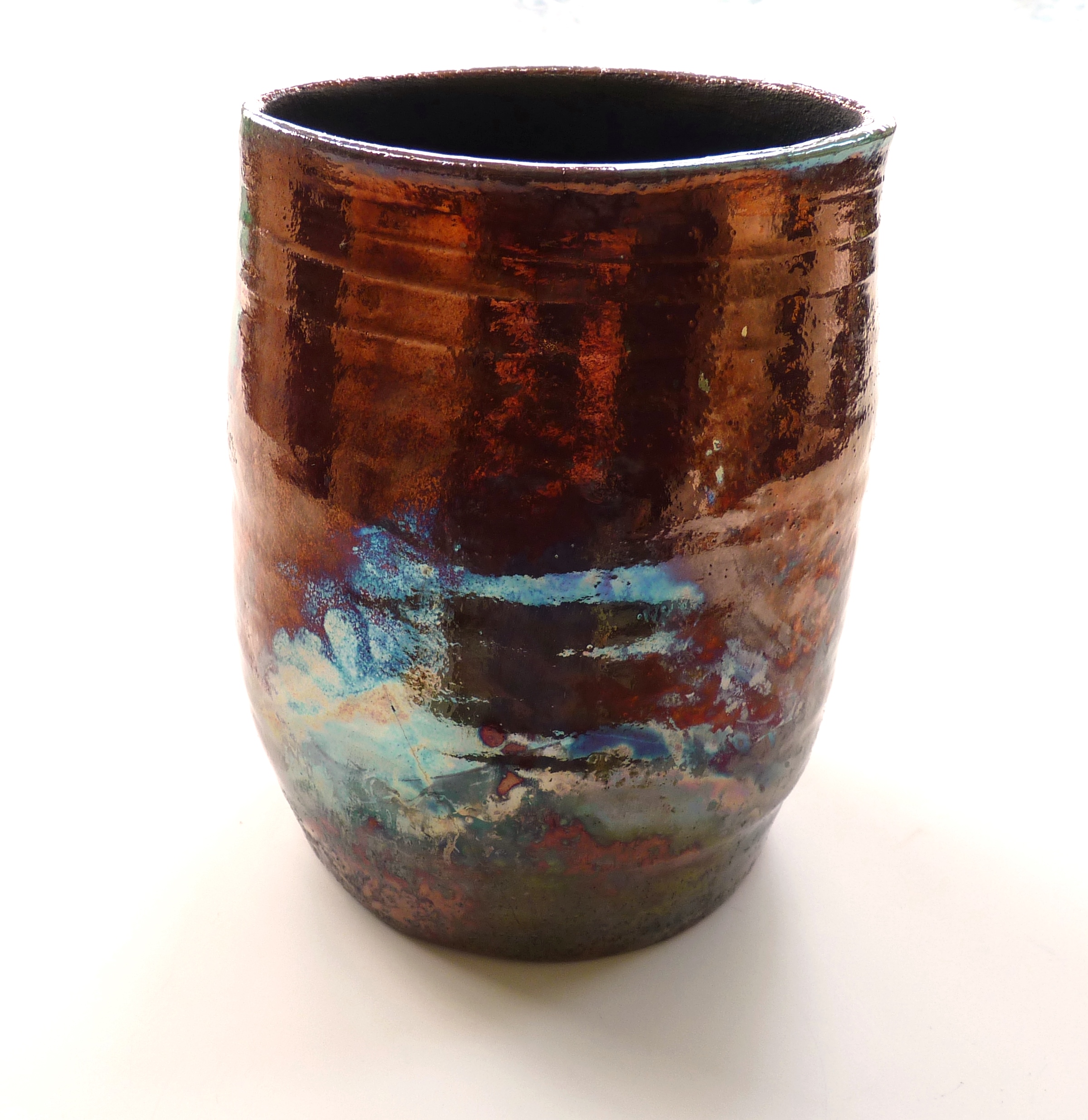 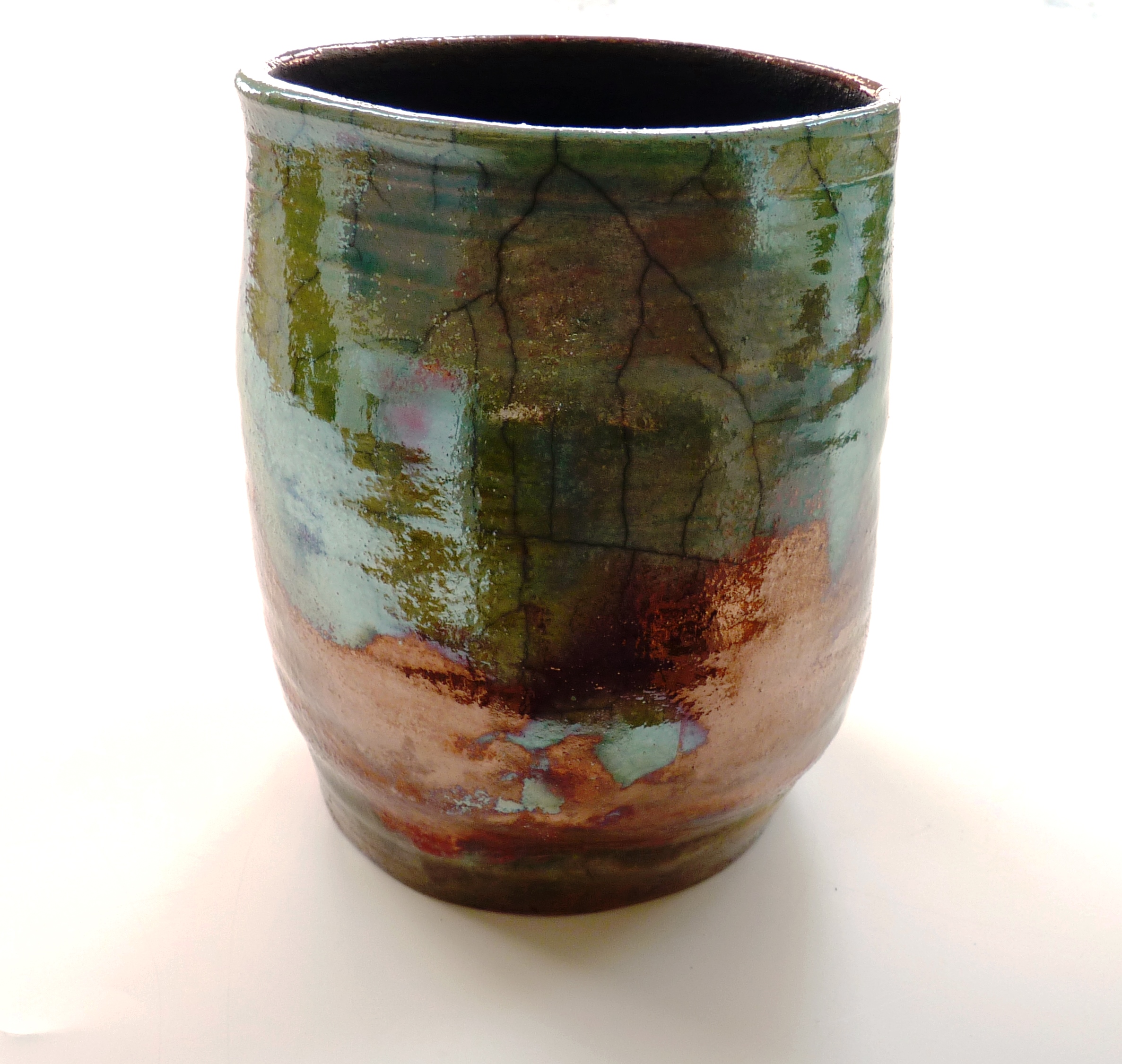 I don’t have time to post all my photos from my raku firing but if you head over to Kiln Fired Art on Facebook on Sunday you can see them all in an album ‘Raku Pieces For Sale’.

When we moved into this house I decided that I didn’t want anything near the windows that would distract from the view so I went for plain walls and simple blinds. 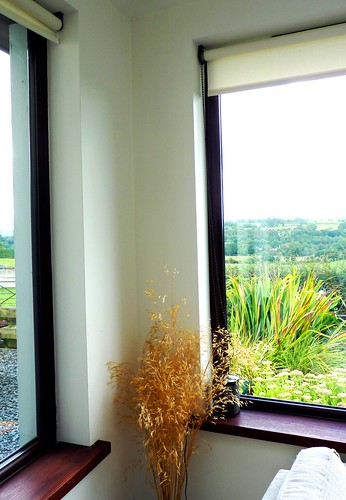 But for some time I’ve wanted to make something to hang in the corner that would add interest but not overwhelm. I wanted to connect the outside and the inside in some way.

So while I had the raku kiln out I made ‘Falling Leaves’ wall art. These are made with the heavily grogged clay , I used some brushed on as slip to roughen up the surface. This has worked really well adding texture to the leaves once glazed.

Some of the leaves have amazing colour. 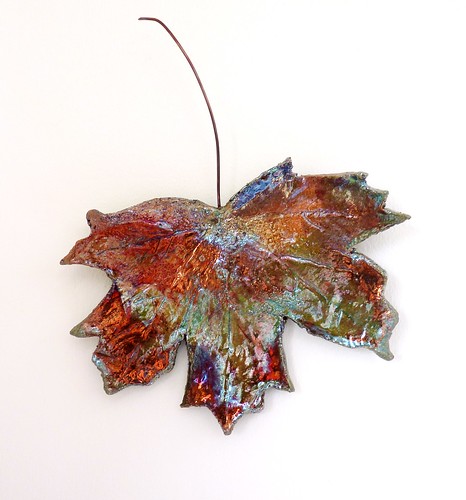 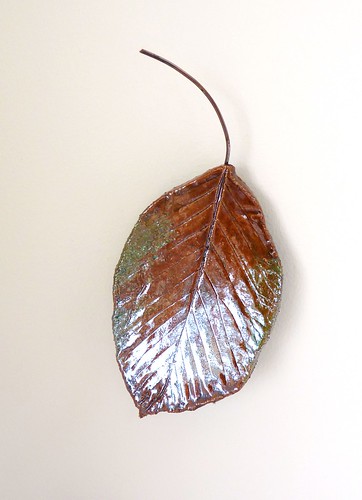 The beauty of raku is you are never quite in control, I’m sure I didn’t use these colour glazes. 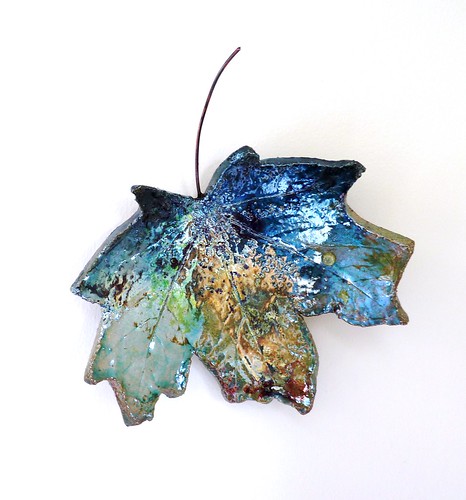 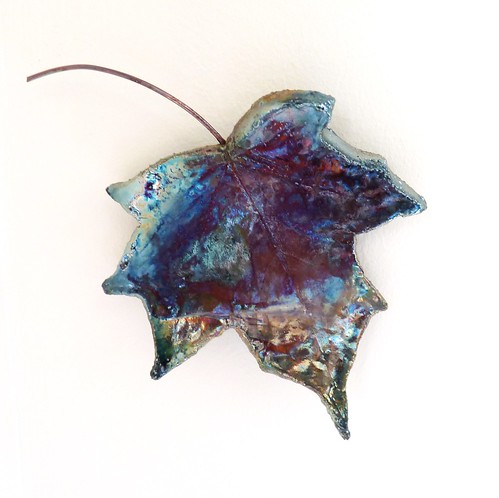 I thought this leaf was less interesting so I gave it some faux water droplets. 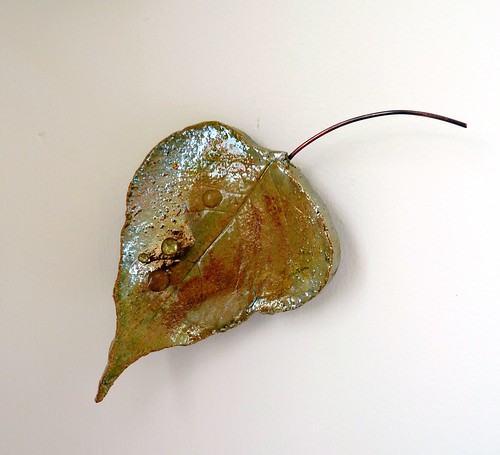 Here’s how they look all together, I’m really pleased with them. 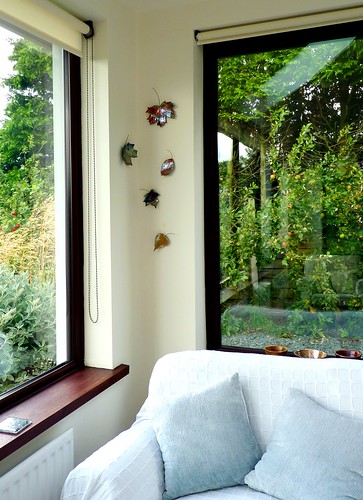 Spacing the leaves was a bit problematic even though I tried them out on the floor and measured the spacing. Never mind, out came the polyfilla. I’m still not sure about the spacing, I might add a couple more small leaves. I have a kiln full of leaves bisque firing today as I’m certainly going to add these to my range of products. I’m so pleased with how these turned out, and they make me smile.

Is it possible to have too many pairs of hand knitted socks?
Snowdrops are such a fleeting show it’s lovely capturing them in clay so they last forever
Opened the kiln to find lots of lovely flower tiles. I rarely show you inside my kiln as everyone,s kilns always looks so pristine, mine has scruffy batts, crumbling bricks and a saggy element. How do you keep your kilns so clean?
Loading Comments...
Comment
×